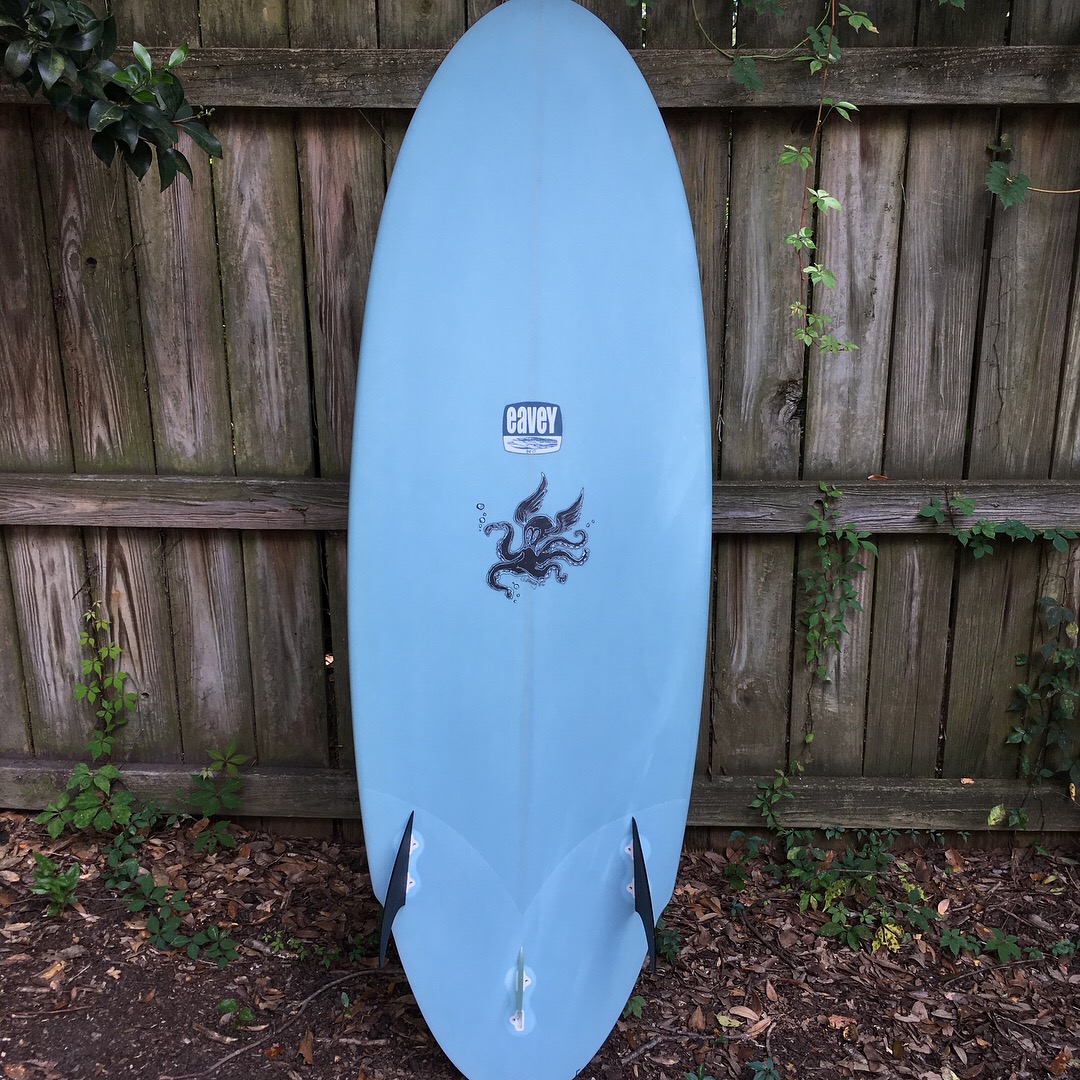 There is this board shaper in Hampstead, NC. Greg Eavey Instagram: @eavey_surfboards. There are lots of small time shapers, but this guy’s work is something special. The caliber of his shapes are one thing, but the artistic ability and care that he puts into his boards through his entire hand-made process are what set him apart. Adding to his grain is the fact that he is almost a secret. You don’t have to travel very far to run into people who haven’t heard of his boards, but when you encounter someone who has ridden one, you instantly acknowledge each other as being a part of this special club.

Greg is a modest guy who shapes in a rusted out warehouse that floods under the lightest rain. The gravel road, winding through a graveyard of boats, that you have to drive to reach his shop ads to the perplexity. First impressions at the entrance include a Harley sitting under massive metal barn doors, wide open with fans barely circulating the humid southern air about; art and surf memorabilia peppering the walls; and a soundtrack of planers, sanders, and instrumental jazz of Greg’s own creation. It’s an incredible place. A place where rad things are built.

I have been around the block in the surf world. Having ridden a myriad of boards by shapers of all sorts and professionally competing on them, I have my two cents on what makes a quality ride and what counts for mastery of the shaping craft. That is why I bug Greg for boards. He gets it. The shaper/surfer relationship has faded with machine shaped boards and factories replacing the little guy, but it is still alive and well off of US-17 in South Eastern North Carolina. Tell Greg what shape you want, what level of surfing you are/want to be at, how you want the board to feel, how you want the board to make you feel, what you ate for breakfast, whatever; he will set you up. You don’t feel like Greg is just making you a board. You are included in the process.

We teamed up on a board for this hurricane season. And we nailed it.

Surfing in the Charleston area is interesting (not always in a good way); mostly because of the geography. The Carolina Capes and all of Florida block a lot of the long range swell that Could approach us from the North and South, and on a more local level, the continental shelf extends for almost 200 miles off of the coast. The waves have to travel for that distance in such relatively shallow waters for so long, that by the time the swell reaches us, it has lost most of its steam. In layman’s terms, it is flat here. A lot.

So I needed a board that could milk every ounce of power out of the weaker surf to keep performance up. I also longboard much of the time and appreciate not having to hop around to keep speed. We settled on this wacky eggy shape, with slightly sharper rails continuing up about 1/3 to 1/2 way up the board, two shallow channels between the fins, and cut out rails on the tail. I have it set up as a Twin with a trailer as the center. This was all a total gamble, but it actually worked. I get to sit a little further out and pick off the sets due to the eggy shape, and once you are up, foot placement makes it whatever kind of board you want to ride. Slide up slightly and take advantage of the drive built into the rails, channels, fins, and high volume. Step back for quick snaps and the looseness of a traditional twin fin. Or settle somewhere in the middle and carve all day long.

It is a complex board, and I am still dialing it in. Fall and winter are coming, so hopefully we will get some good swell!

Did I mention the rad flying octopus that Greg painted on the bottom? 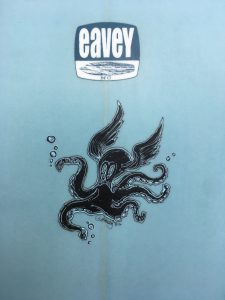 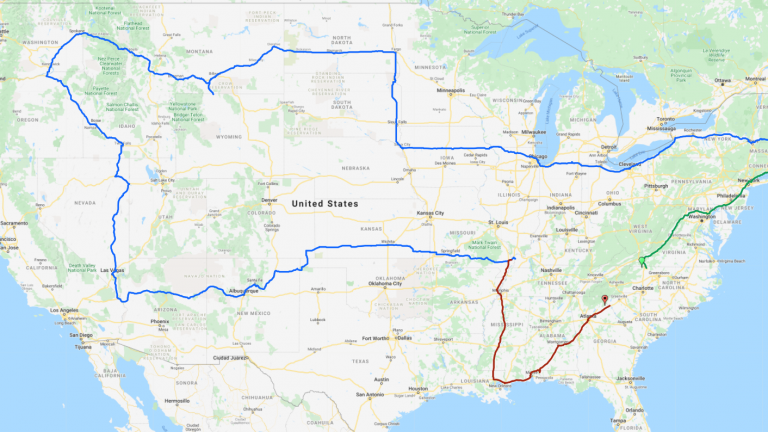 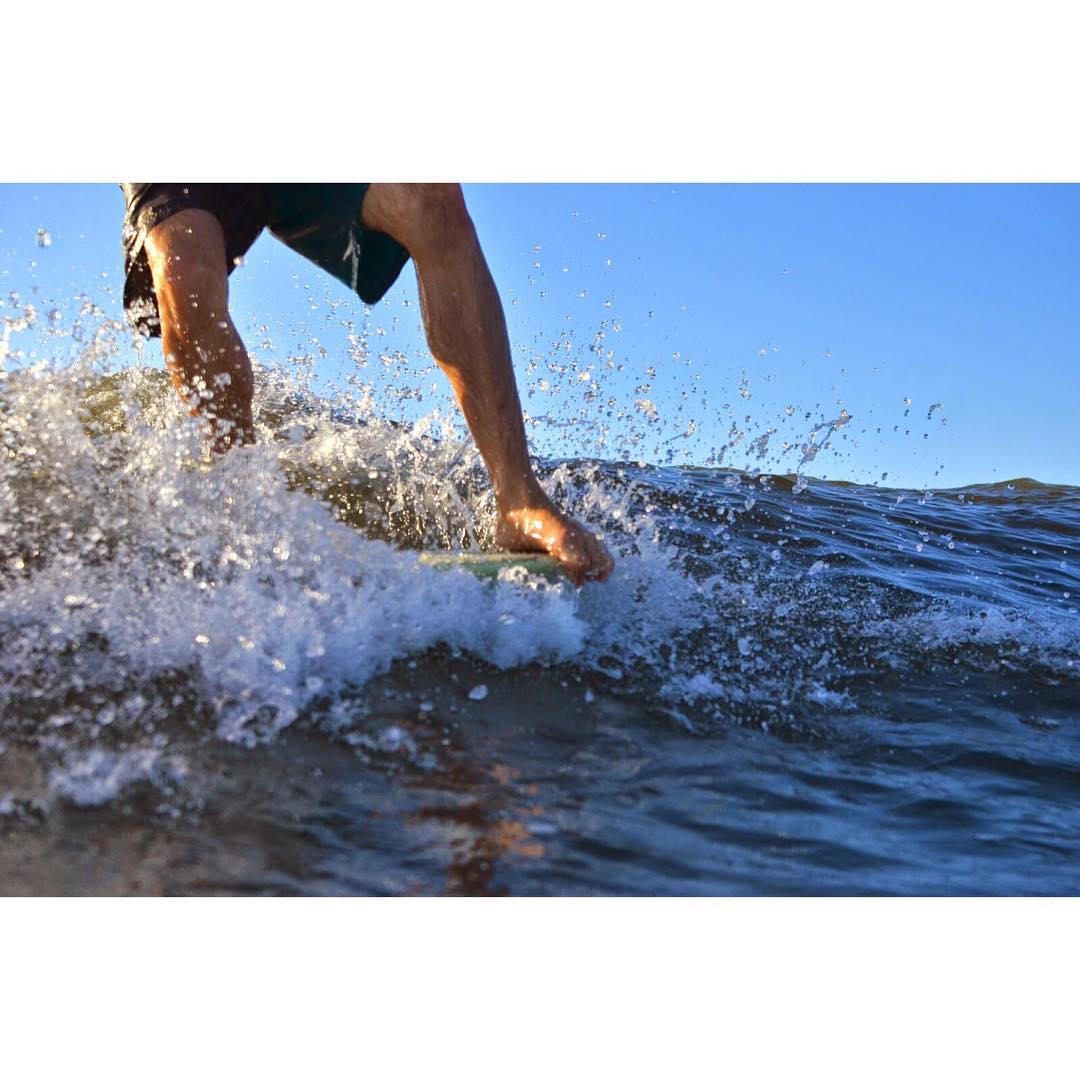 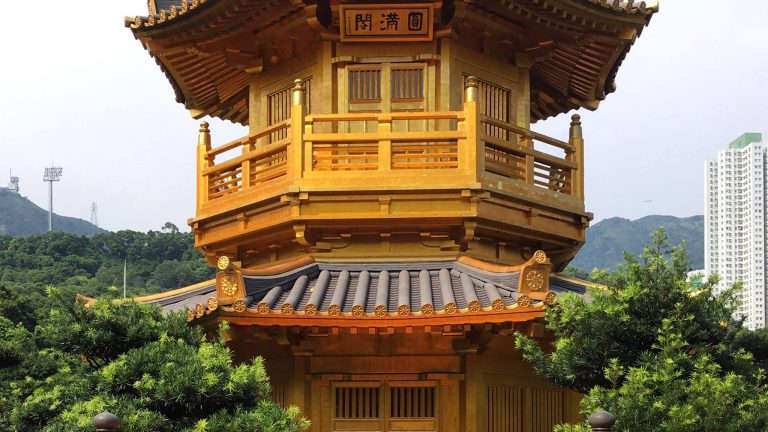